Ever since plate tectonics set the Earth in motion, earthquakes have shaken the ground and modified the landscape. Our deepest trenches, tallest mountains, and breathtaking rift valleys are a testament to earthquakes' power and long-term influence on the planet. But while the history of earthquakes is long, our record of them is extremely short.

Modern seismometry began around 1890 with the advent of the first damped horizontal pendulum seismometers. It took years of advancements before seismologists could record the high-resolution, digital records that we rely on today to locate earthquakes, determine their size and characteristics, and untangle the properties of the Earth from the wiggles of their traces.

Technological advancements over the past few decades have enabled engineers and seismologists to observe enough event records to identify differences in the distribution of recorded ground motions at the regional scale. The strength of ground shaking, for example, decays more rapidly with distance from an earthquake on the west coast of the United States than from one on the east coast. This happens because the rocks in the eastern United States are hard and competent, and they ring like a bell when hit with an earthquake. The rocks in the western United States, on the other hand, are heavily faulted and broken. This tends to dampen the ground motions more quickly with distance. 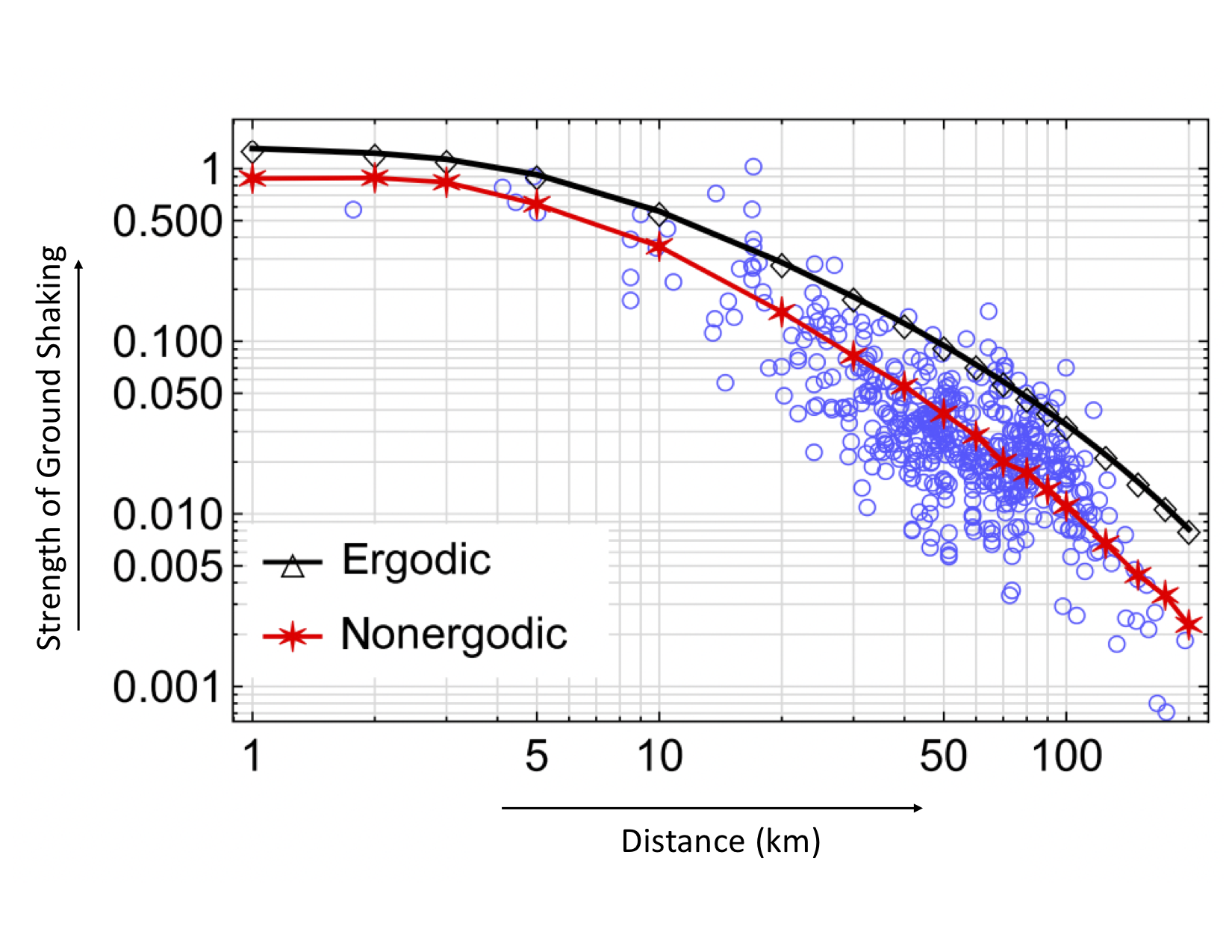 Given regional differences like this, the expectation is that there must also be observable site-specific differences in ground motion that arise from smaller scale properties, such as average site shear-wave velocity, soil depth, or the specific path that the earthquake energy travels through the Earth. Modeling ground motions at the site-specific scale is challenging because it requires a lot of data to constrain the modeling uncertainty, and it highlights one of the main frustrations of the engineering seismologist; we can always use more data.

The traditional approach to modeling earthquake ground motions is building ergodic ground motion prediction equations (GMPEs). GMPEs are models that predict the amplitude (size) and frequency of ground shaking at a site given an earthquake magnitude and the distance from the earthquake source to the site. Earthquake records allow model developers to analyze the variability in recorded ground motions given magnitude and distance.

GMPEs are also used to understand regional differences in the attenuation, or decay, of ground-motion amplitude with distance from the earthquake source, but the short earthquake catalog often means that there is an insufficient amount of data in a particular data region to provide adequate constraint. An example of this is large magnitude earthquakes at short distance. Annual rates of earthquakes in the entire United States predict only a handful of earthquakes in the M6-6.9 range, and no more than two earthquakes above M7 in rare instances. It is entirely likely that a regional earthquake dataset would lack sufficient records for large magnitude earthquakes at close-in distances, providing little or no constraint for the model in this data region.

In the absence of adequate data, engineers make assumptions.

A fundamental assumption is baked into almost every GMPE to account for the model developers traditionally not having enough data to capture the regional ground motion distribution. Their clever workaround for sparse data has been a worldwide grouping of earthquakes from tectonically similar regions, meaning regions with a similar geologic setting and style of earthquake faulting. The joint analysis of earthquakes from tectonically similar regions assumes that the global distribution observed in recorded ground motions is the same as the ground motion distribution that would have naturally occurred at a single location if given sufficient time to record enough earthquakes -- the ergodic assumption.

The ergodic assumption helped engineering seismologists advance the state of practice when earthquake records were limited. We are now entering into an exciting time where strong-motion instrumentation is broadband (they record over an extensive range of frequencies), high-resolution (they record at a high sampling rate), digital, and relatively inexpensive to operate. These advancements have enabled the development of dense networks of seismic instruments, all feeding data automatically to their host institutions like the United States Geological Survey (USGS), the University of California - Berkeley, CalTech, and others. The increasing number of strong-motion earthquake records from these networks over the past decade has made it clear that there are site-specific differences in ground-motion, and we need to build that dependence into the models we create to predict ground shaking at a site.

The deviation of ground motion from the global average is demonstrated in the figure above, modified from the 2019 publication by Abrahamson et al. on “Probabilistic Seismic Hazard Analysis in California Using Nonergodic Ground-Motion Models.” The y-axis of the figure represents the strength of the ground shaking and the x-axis represents the distance from the earthquake location. The solid lines in the figure represent two alternative predictions of the strength of ground shaking expected from a M6 earthquake in central California over a range of distances from the earthquake. The black line shows the prediction using an ergodic model that was built using earthquake records from a global dataset incorporating all available records from regions tectonically similar to California. The red “Nonergodic” line shows how the model changes when the ergodic model is adjusted to account for the systematic and repeatable characteristics of the ground motions recorded in central California. The difference is that the red line is informed by a regionally specific dataset, whereas the black line is not. Making the adjustment from the black line to the red line is called removing the ergodic assumption, and the result is a change in the mean ground motion prediction at the site. In some areas, the nonergodic adjustment increases the prediction of the average strength of shaking relative to the ergodic model, in other cases the prediction is decreased.

Removing the ergodic assumption has many advantages because it removes the averaging effect that results from mixing data from different regions and site conditions. With region-specific data, GMPE developers can make better estimates of the site-specific median ground motion trends, with a penalty that the uncertainty in the median predictions remains large until sufficient data is available to provide constraint. Region-specific records also allow model developers to identify path-specific properties of the recorded ground motions. For example, maybe average ground motions at a site are consistently lower when the earthquake source is to the east and higher when it is to the west. This result would indicate that ground motions have a directionality component, an insight that would not be possible under an ergodic framework that averages data from many regions.